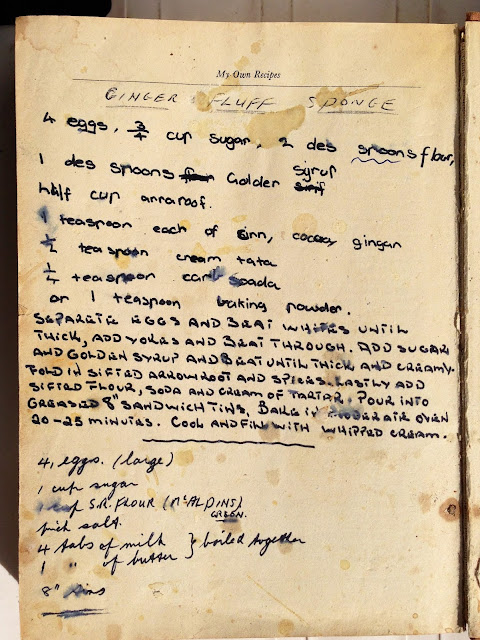 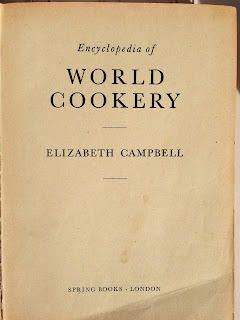 On the weekend my mother-in-law gave me one of her cook books- Encyclopedia of World Cookery by Elizabeth Campbell published 1958, an unexpected gesture.  The pages are very very yellow and the linen cover quite worn and stained. By chance I just flicked to the very back and there was her famous Ginger Fluff Sponge recipe! I decided that the ingredients were written by one of her young daughters and the method written in an adult hand.  The ingredients at the bottom of that page, she told me, was for a plain sponge, and nothing to do with the one above.
I remember clearly as a young wife this ginger fluff sponge made an appearance at every BBQ, every birthday, christening or afternoon tea.  In fact any family occasion, the ginger fluff sponge was in attendance. We looked for it first on the cake table and if it didn't appear we asked the question WHY?
As you can see the recipe has been well used.  This would be perfect to enter into this month's Random Recipe Challenge over at Belleau Kitchen for September. Dare I make it?

Ingredients (as above)
4 eggs,
3/4 cup of sugar (I presumed caster)
2 dessert spoons flour (not sure if this was plain or self raising so I used SR. Was intrigued by the dessert spoon measure too!)
1 dessert spoon of golden syrup
1/2 cup arrowroot (not something I had in my pantry so a special trip to the shops for this one)
1 teaspoon cinnamon
1 teaspoon cocoa
1 teaspoon ginger
1/2 teaspoon cream of tartar
1/4 teaspoon carb soda or 1 tea spoon baking powder - strange options but I presume you made do with whatever you had in the cupboard.

How to do it......
Grease and line with greaseproof paper two small 8" sandwich tins (I only had 6" ones)
Separate the eggs and beat the whites until thick ( I found this difficult to judge)
I lightly whisked the yolks with a fork and beat them through the whites
Add sugar and golden syrup and beat until thick and creamy.Fold in sifted arrowroot and spices (do this in small amounts as the arrowroot can go lumpy!)
Add sifted flour, cream of tartar and either soda or baking powder which I used.
Pour into sandwich tins and bake in a moderate oven (what is a moderate oven?  As my oven is fan forced and tends to be very hot I opted for 160C) in retrospect it probably should have been hotter.
Bake for 20-25mins. I baked for 18 mins and then took the sponges out as they were as brown as I would have liked and when tested with a skewer  came out clean.
Cool and fill with whipped cream.

Well I think I have a long way to go, to even come close to my mother-in-law's ginger fluff sponge, as mine was quite dense, edible, but definitely not fluffy! I decorated mine with whipped cream on the top and a little sprinkle of cinnamon. 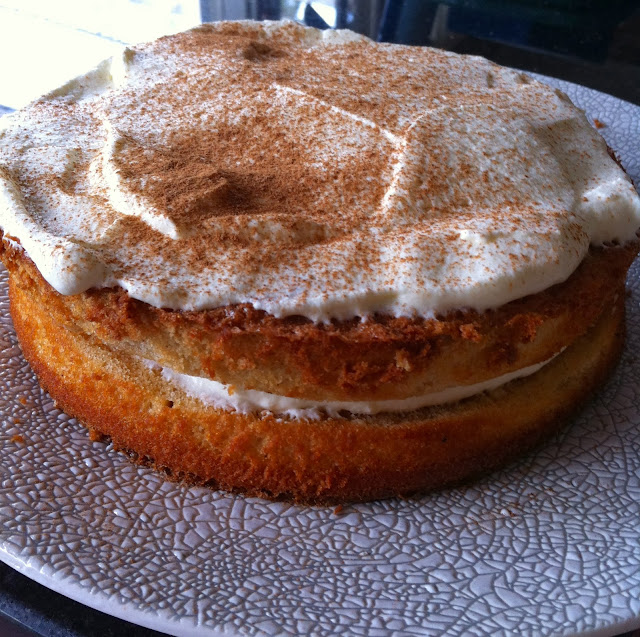 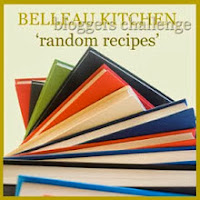 In by the skin of my teeth once again to Random Recipes No. 32 at Belleau Kitchen Pop over and join in if you can.


Posted by Magnolia Verandah at 05:10

Easily find the books you want. 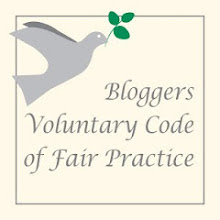 Magnolia Verandah
Melbourne, Victoria, Australia
Contented woman, wife, mother of 4, a "Dinner Lady" legend, grandmother of 10 and we all love to cook!